My third IPL (via Sony MAX + SIX) and the biggest (and the last) for Sony. It was a good run. Thanks to the cool folks at Tonic who brought me back for this campaign.

Digital before Television? Yup. Here’s how we launched the 2017 campaign of the VIVO IPL.

#VIVOIPL Celebrations are on, scroll to find out …

What better way to thank our fans than to feature them? Here’s how we did it in real time.

10 Years of VIVO IPL, time flies! Put your hands up in the air and #GiveMe10 🙌 as the junoon and enthusiasm for the 10th edition of VIVO IPL sets in. To get featured on our live video, use #GiveMe10 🙌 in the comments section below. #10SaalAapkeNaam

We also auto-featured them on our cover pictures (we generated hundreds.) Technology can be weird.

We also made this cool quiz, in line with the TV communication, to help fans find out… 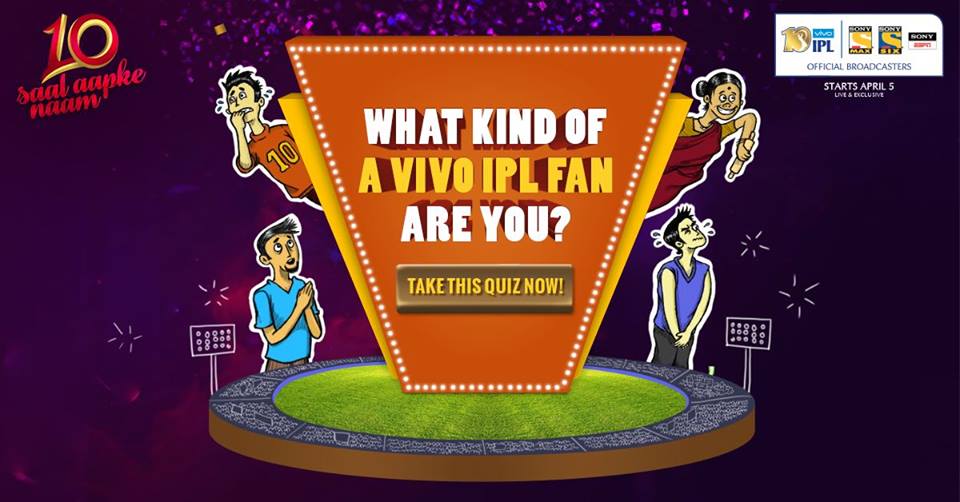 Then of course we made our fans tag other fans.

Tag that person who would make sure you can watch your favourite team play with no obstacles! Tag your #FarishtaFan

“Dekhna ab out hoga” “Ab toh chauka lagega” Do you also know anyone who believes they know it all? #10SaalAapkeNaam

The 2017 IPL Anthem was launched in the Twitter Blue Room by the men who made the music.